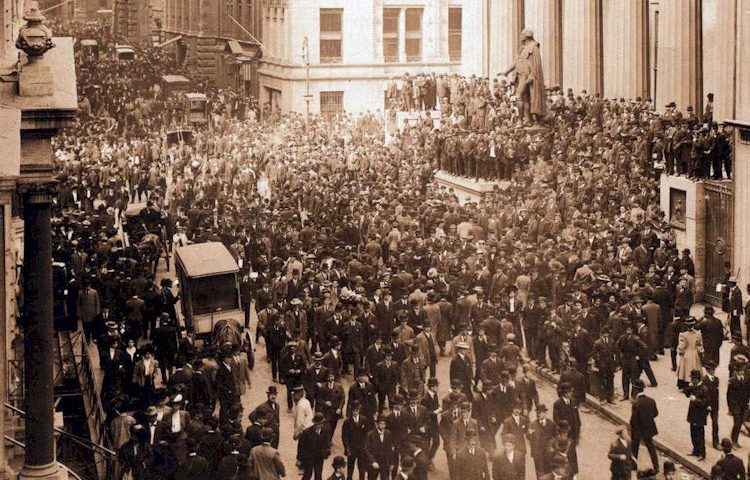 1907 Bankers’ Panic and the birth of the FED

In this series of posts we intend to highlight significant events in the history of financial markets. Learning from the past helps us understand the evolution of things and can also give us insights into the future. We believe this is particularly true for the financial markets.

The Panic of 1907 – also known as the 1907 Bankers’ Panic or Knickerbocker Crisis – was a financial crisis that took place in the United States over a three-week period starting in mid-October, when the New York Stock Exchange fell almost 50% from its peak the previous year. This global financial crisis inspired the monetary reform movement and led to the creation of the Federal Reserve System.

The Panic of 1907 was the first worldwide financial crisis of the twentieth century. It transformed a recession into a contraction surpassed in severity only by the Great Depression.

Panic occurred, as this was during a time of economic recession, and there were numerous runs on banks and trust companies. The 1907 panic eventually spread throughout the nation when many state and local banks and businesses entered bankruptcy sparking a crisis of confidence. Primary causes of the run included a retraction of market liquidity by a number of New York City banks and a loss of confidence among depositors, exacerbated by unregulated side bets at bucket shops. The panic was triggered by the failed attempt in October 1907 to corner the market on stock of the United Copper Company. When this bid failed, banks that had lent money to the cornering scheme suffered runs that later spread to affiliated banks and trusts, leading a week later to the downfall of the Knickerbocker Trust Company—New York City’s third-largest trust. The collapse of the Knickerbocker spread fear throughout the city’s trusts as regional banks withdrew reserves from New York City banks. Panic extended across the nation as vast numbers of people withdrew deposits from their regional banks. It is the 8th largest decline in U.S. stock market history.

The panic might have deepened if not for the intervention of financier J. P. Morgan, who in the absence of a Central Bank, pledged large sums of his own money, and convinced other New York bankers to do the same, to shore up the banking system. This highlighted the impotence of the nation’s Independent Treasury system, which managed the nation’s money supply yet was unable to inject liquidity back into the market. By November, the financial contagion had largely ended, only to be replaced by a further crisis. This was due to the heavy borrowing of a large brokerage firm that used the stock of Tennessee Coal, Iron and Railroad Company (TC&I) as collateral. Collapse of TC&I’s stock price was averted by an emergency takeover by Morgan’s U.S. Steel Corporation—a move approved by anti-monopolist president Theodore Roosevelt. The following year, Senator Nelson W. Aldrich, father-in-law of John D. Rockefeller Jr., established and chaired a commission to investigate the crisis and propose future solutions, leading to the creation of the Federal Reserve System.