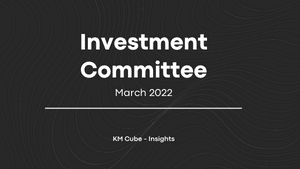 KM Cube’s Investment Committee met to discuss its tactics into March and how the recent Russia invasion of the Ukraine affects global economy and our client’s portfolios. We stress how the lack of first-hand on-the-ground research of the specifics limits us to a journalistic analysis of this multilayer event that is the Russia/Ukraine stand-off.

The result being that market professionals may not bear some advantage when forming a view of current investment environment and it would prove strenuous to deliver some alpha before things calm down. It was thus suggested that we sit on the sidelines until some kind of resolution is offered, and then revisit the issue to discuss the new market structure that will certainly come out of this crisis – particularly in the fronts of oil, the US$ dollar, inflation and the path of interest rates.

Coming to interest rates, it was a unanimous view that the Federal Reserve bank of the US will most certainly raise dollar interest rates this month, for the first time after fifteen years. It will probably be not a 0.50% rate hike that market expectation implied until last week, but rather a +0.25% interest rate hike – the first of a series of hikes gradually within the next one-and-a-half year or so.

We think they will also be market-dependent. Our core scenario is that in case of any extreme price correction central banks would prefer to protect price stability rather than fight inflation. With this view in mind, a couple of primary trade ideas follow.

1 First, negative rates (that’s nominal rates minus inflation) will persevere longer than expected. This is big for bond investors and for the part of clients’ portfolios we consider as fixed income. We are not confident with bonds going forward and fear we may find that investors are really locking-in some negative income – or some slightly positive yield that would actually be lower than annual charges.

We believe that the market is heavily invested in this. These prospects pin the outlook around current levels and, outside the geopolitical tensions, any wider price action might arise only if the Fed acts decisively unlike market expectations. Volatility should be relatively constrained and we think that, if anything, it would be volatility-of-volatility that may prove persisting at heightened levels. That’s because the main assumption is that the Fed does not have a specific rate hike path to follow and interest rates going forward would be data-dependent.

2 Second, we observe that usual opportunities from periodic market nervousness today propagates further out than short-term elevated stock market volatility, more towards expirations between 6M and 12 Months. Owing to the Russia/Ukraine stand-off, investor complacency has come down during February. We now witness higher implied volatility up to October and November expirations. There’s a reason this may be structural and can be harvested in a systematic way: Most large players used to employ the credit market as a hedging instrument. They bought CDS indices and they bought credit-related ETF puts (i.e. LQD, HYG) and perhaps gold. These hedges did not work well neither during the coronavirus crisis nor during the recent Russia invasion, and market perception is that they might not work during the next crisis either. These investors are now seen hedging via purchasing very far out-of-the-money S&P500 puts and this detail makes options expiring in approximately 9 months very, very, expensive. This demand for insurance creates inefficiencies. In our own universe, it actually creates the biggest supply/demand imbalance that can be exploited in a disciplined method. For the overall market such flows might not mean everything – but they can be an expression of everything. The Committee briefly discussed the prospects of issuing 9-12months structured products that offer a compelling yield to holders, with the risk of being delivered US indices approximately 50% off current levels. The aim is to garner this positive carry at least until we see VIX dropping lower than, say, 20%.