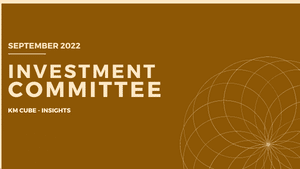 World GDP has been trending down for some time, reflecting either a constraint or a non-productive use of resources. We believe that mainstream asset and commodity prices have peaked for the year, and at the moment we cannot see where growth may come from. Despite these, many signals indicate this is a controlled slip lower and we are looking for September to tactically add to our risk exposure, mostly in US and EU equities and sovereign fixed-income. The lack of central banks’ guidance as to what to expect for future interest rate moves leads to persistently higher volatility, not only in equities but also in commodities and FX.

The Fed’s policies will sooner or later break other developed world currencies: the Euro, the GBP, and the Yen. The energy and food crisis in Europe, and higher mortgage costs in the UK, will eventually point to slower growth plus credit and bank stress. Less willingness from ECB and BoE to raise interest rates will make EUR and GBP less attractive against the US$.

With time, the Fed will then break down commodities such as silver and gold that will not be able to provide any realistic hedging. And, lastly, we will likely see negative effects in the prices of hard assets such as real estate. This would be a gradual and painful process playing out over the next 12-18 months or so.

Members were unanimous in their decision not to attempt to time the markets, and passively remain invested in long-only mainstream assets’ allocation, with a tilt towards the US Dollar and European bonds.

The Committee also took time to examine in length a proprietary systematic approach to statistical arbitrage, an in-house quantitative method for signaling pair-trades mainly in the field of cryptocurrencies, and its prospects to apply that in our stock universe too.

Given successful implementation, the strategy will be incorporated into the Unicorn systematic model.